Watch this short video on the differences.

Today the 3 Orpington sisters got to be loose within the poultry fencing. The others had to stay in the tractor because a few of them didn’t want to play nicely. Ninny ninny, boo boo! 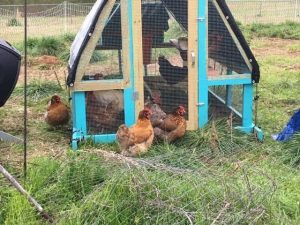 This past week the new poultry fencing arrived and we began using it. It is a huge improvement over the fencing we had been using to protect the chickens. The new fence surrounds a relatively large area around the mobile chicken tractor, giving the chickens much more room to roam as they forage and keeping predators out with an electric shock. Yesterday we began their free ranging, letting the chickens roam the old garden site, scratching and pecking to their hearts’ content. I’ve attached a few pictures from their weekend activities.

The Colonel (as in Colonel Sanders) is the white rooster, aka the Top Dog. The other rooster, in the second photo, is Beauregard. It’s too difficult to tell the 8 hens apart so they will be getting colored anklets soon so I can keep track of them as individuals. That means they will be getting names, of course!

Our egg cartons also arrived so we can now offer for sale the eggs from these happy girls. They forage on grass supplemented with high quality, non-GMO feed from Coosa Valley Milling. The eggs are brown to light brown as we have 2 breeds of hens; one breed lays brown, the other lays light brown eggs. The price is $5 for a carton of a dozen eggs. PM us if you are interested in purchasing eggs. 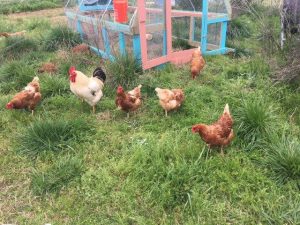 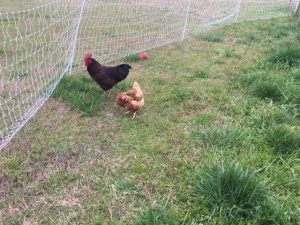 Realizing we needed a refrigerator dedicated to eggs, Mr. Sweet Gum Farm and I embarked on the challenge of searching the vibrant segment of the economy known as Craigslist for a used refrigerator. We are not complete strangers to this arena and have had some overall pretty good experiences in the past so thought we were prepared for this endeavor. We were wrong– so wrong, in fact, that this experience has now created a new phrase in our lexicon: Craigslist crazy.

In this foray through the wilds of this secondhand segment of the economy, we communicated with many people in various ways. We texted, called, and emailed. We finally seemed to be on the verge of an agreement and were at the appointed place at the appointed time so we could see the refrigerator–only for the seller to inexplicably be a no-show. Not only did he never show, he replied to my query as to whether he was on his way (sent while we were still at the meeting place) with a message well over an hour after the appointed time saying he could be there in 5 minutes, and sent a spiteful reply when I said we had already left. He apparently expected us to wait over an hour on him and didn’t understand why his excuse of “my phone died” wasn’t enough to get us back again. Probably this kind of behavior is why his refrigerator is still available.

By this point we were pretty disgusted with the search but needs must; the girls have been laying well and our kitchen refrigerator is getting full so we kept searching. I replied to another listing and it seemed like we were going to be able to come to an agreement, we just needed to see the refrigerator and pick it up. The seller (actually the seller’s son, but that’s another story) texted 20 minutes early that he was at his storage unit, although he knew we were coming after work so wouldn’t be early but whatever, right? We were at the storage place at the agreed-upon time. No seller. I called him and he said he had gone down the road to get something to eat. We waited a few more minutes. Up drove a vehicle of the color and make the seller said it would be, but the vehicle had multiple occupants, which was unexpected, who looked……unsavory. Actually, that is putting it mildly; they were alarming. I pulled the plug on the deal and we started to back out of the parking spot when the seller called me. He was uncertain because I had brought my husband with me; when I said I would be bringing someone to help load the refrigerator did he think I meant I would be bringing a girlfriend ?? He had never mentioned bringing anyone at all. By this point he had walked out in front of the complex and we all talked, and Mr. Sweet Gum Farm and I reluctantly decided to get the refrigerator (if it was as represented) and get the bleep out of dodge. While waiting for the seller we had seen a police officer enter the premises and knew he was still there so that factored in large part to that decision.

What followed was such a bizarre sequence it reads unbelievably. As I mentioned we knew (although the seller didn’t) a police officer was nearby and Mr. Sweet Gum Farm had his pistol and his conceal carry permit but we were ready to leave at any moment. When we pulled up to the building behind the seller’s vehicle, the back seat occupant was no longer visible. At the time I couldn’t fathom any good reason why he would have been hiding but in thinking about it later I realized that he could have seen the police vehicle and ducked because, say, he was known to the officer? Or because there was a warrant out for his arrest? That would not be surprising in the least.

By this time the seller knew we were uncomfortable with the situation and one sneeze or sudden movement away from leaving. He may have seen the pistol in the truck–it was close at hand and in open view by this point– because he suddenly had a reason to go back to his SUV and had a chance to say something to whoever was in it.

Mr. Sweet Gum Farm is a Marine (you never stop being a Marine so you don’t say “former”) so has had years of experience wearing a pistol. He escorted –that is the only word for it, I can admiringly say in hindsight–us to the storage unit where the seller opened the unit. By this time the seller had actually asked if our discomfort was because he was Mexican. Huh?! I told him that it was because of the party he had brought with him; he said it was his girlfriend and his friend. Um, okay, and why? And why would he be disturbed that I brought my husband (especially when I told him on the phone that I would be bringing someone with me to load the refrigerator) if he brought two uninterested, decidedly sketchy-looking individuals in his vehicle?

Regardless of the original intentions they may or may not have had, the extra vehicle occupants stayed in the vehicle. The seller opened his unit, the refrigerator was as represented so we purchased it and left, not breathing deeply until we had left the storage complex property and were out of sight of the seller’s SUV. This, my friends, is a situation that was “Craigslist crazy” and is the reason we are through with Craigslist.

The good news is that we now have a refrigerator dedicated to eggs. It has been scrubbed thoroughly three times and doused in bleach water twice–and the weekend is not over. Apparently it takes a lot of cleaning for me to be sure the Craigslist crazy has been cleaned out of it.

It’s been a big week for Sweet Gum Farm. We got a call from one of the state apiary inspectors asking to inspect our hives. We’d heard this inspector give a presentation before so we were excited to have this opportunity as well as a little nervous to hear what someone with over 30 years of bee experience would think about our hives. We’re happy to share that he didn’t find any problems and he said our girls are doing great this early in the year. We thought they looked good but we may be a little biased so it was validating to hear his experienced opinion. Go, girls, go!!