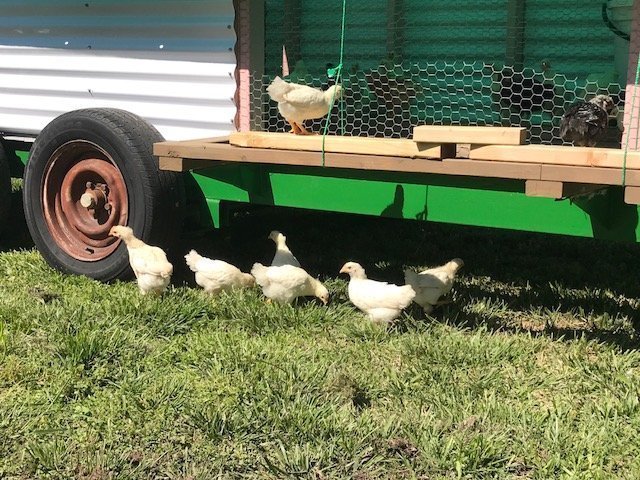 Brief history of the Amberlink

If you farmed in the 1970’s you might remember the Amberlink, as it originated in the USA. But as egg production moved away from small family farms to large corporation-run confinement operations in the 1980’s the Amberlink breed fell out of favor as they do not do well in confinement.  They must be given room to forage and move around. 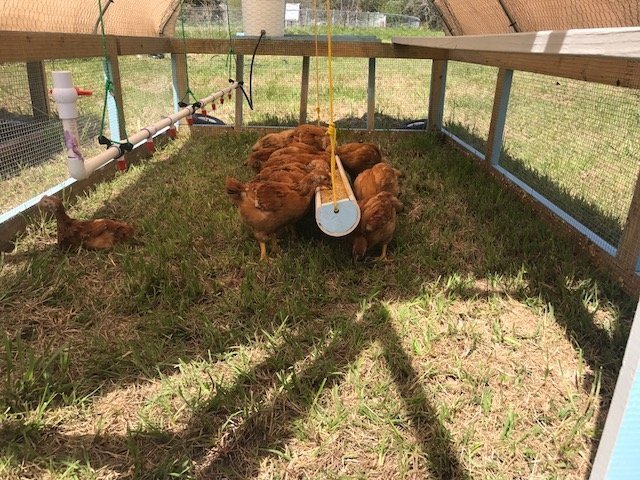 Some of the reasons we like this breed are:

A brief history of the Freedom Ranger(TM):

The Freedom Ranger(TM) birds were derived from an American and European heritage breeds, and was developed in early 1960’s to meet the high standards of the French Label Rouge Free Range program. This program, started by the French government in 1960, requires very specific slow-growing genetics that have been qualified through taste and other sensory evaluations to be significantly superior to other products in the marketplace. The program also has very specific growing and processing requirements that are much more stringent than any other program in the world. To learn more about the Label Rouge program the ATTRA (Appropriate Technology Transfer for Rural  Areas) put out a document that goes into more detail.

One of the neat things about moving the chickens around on the pasture over the years has been watching the soil change as a result. The chickens loosen the soil as they dig around in and scratch it, as they bathe in it. They aerate it and, as a result, rainwater is better absorbed. It used to be that the pasture’s dirt was so hard-packed that rainwater would sit on the surface or would run off in areas where the ground isn’t level. That isn’t the case anymore; now the rainwater is actually absorbed and used by the soil instead of running off of it. The chickens also fertilize the soil with their waste. Even from the first time we put chickens on the pasture, we could tell the difference in the grass. That keeps improving with every season. Watching this natural way of improving the soil actually work is an inspiring thing.

As poultry farmers and as members of the America Pastured Poultry Producers Association, we get asked from time to time the question, ” Is pastured poultry the same as free range?”   The answer, in short, is “no” but it’s a play on words created by the food industry that brings us to that answer.

What Does ‘Free-Range’ Mean?

Who can argue with “free-range eggs”, right?   For most of us, that gives us the impression of a flock of chickens foraging across an open pasture.  However,  “free-range” is a USDA label which basically means the birds have access to the outdoors and aren’t raised in cages. That’s a broad definition, and it’s abused by the large poultry companies with a government-sanctioned production loophole.   A company can still house its hens in a large building and still keep its hens indoors all day, merely adding a few small doors that are open for a few minutes a day.  It may not be physically possible for all of the hens to exit those doors in the few minutes they are open, but it still counts as “free-range” thanks to the lobbyists (and commercial giants) who influenced the lawmakers.  As long as there are no individual cages, that is good enough.  So the carton in the store may have a graphic of chickens roaming the green pastures but that is likely not the hens’ daily life as much as it is an advertising image.

Free-range implies a bird on range or pasture, but pasture or outdoors is not actually required or enforced. This is a fundamental deceit in the free-range organic chicken, turkey, or eggs that you buy from commercial poultry brands.

What about Pastured Poultry then?

To Sweet Gum Farm Pastured Poultry means that the birds live out on pasture starting around 3 to 4 weeks of age in mobile coops or, as the coops are also known, chicken tractors. These chicken tractors are moved on a regular schedule to give them fresh grass. To help protect them against predators we “day range” them which means we secure them in the tractor at dusk, letting them out again in the morning. This protects them from owls, raccoons, possums, skunks, coyotes, as well as other predators.   It is not just people who like to eat chicken.  With the chickens being on pasture all of the time this allows them to consume grasses, bugs, worms and anything else they can find.  However, proper nutrition for chickens can’t be met with grass and bugs alone; to make sure all of their nutritional requirements are met we also provide them with a non-GMO feed, along with grit to ensure proper digestion.

Pasture-raised hens also produce healthier eggs, according to a 2003 study out of Pennsylvania State University.  During the study, researchers found that one pasture-raised egg contains twice as much omega-3 fat, three times more vitamin D, four times more vitamin E and seven times more beta-carotene than eggs from hens raised on traditional feed alone.  They credited the difference to the freedom the chicken is given to forage grass and insects as well as being outside in the sun.  Having happier hens results in more nutritious eggs, apparently!

We got the 12 week old chickens that are in the new chicken tractor moved out to the big pasture this weekend. They are really enjoying it. 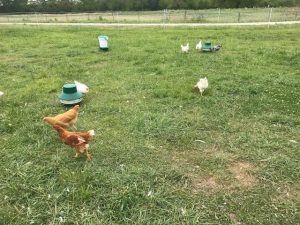 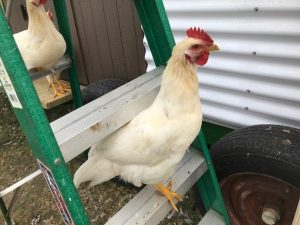 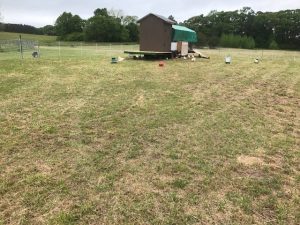 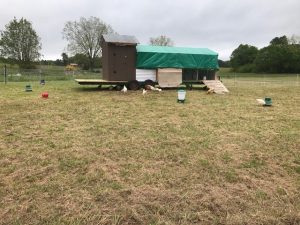